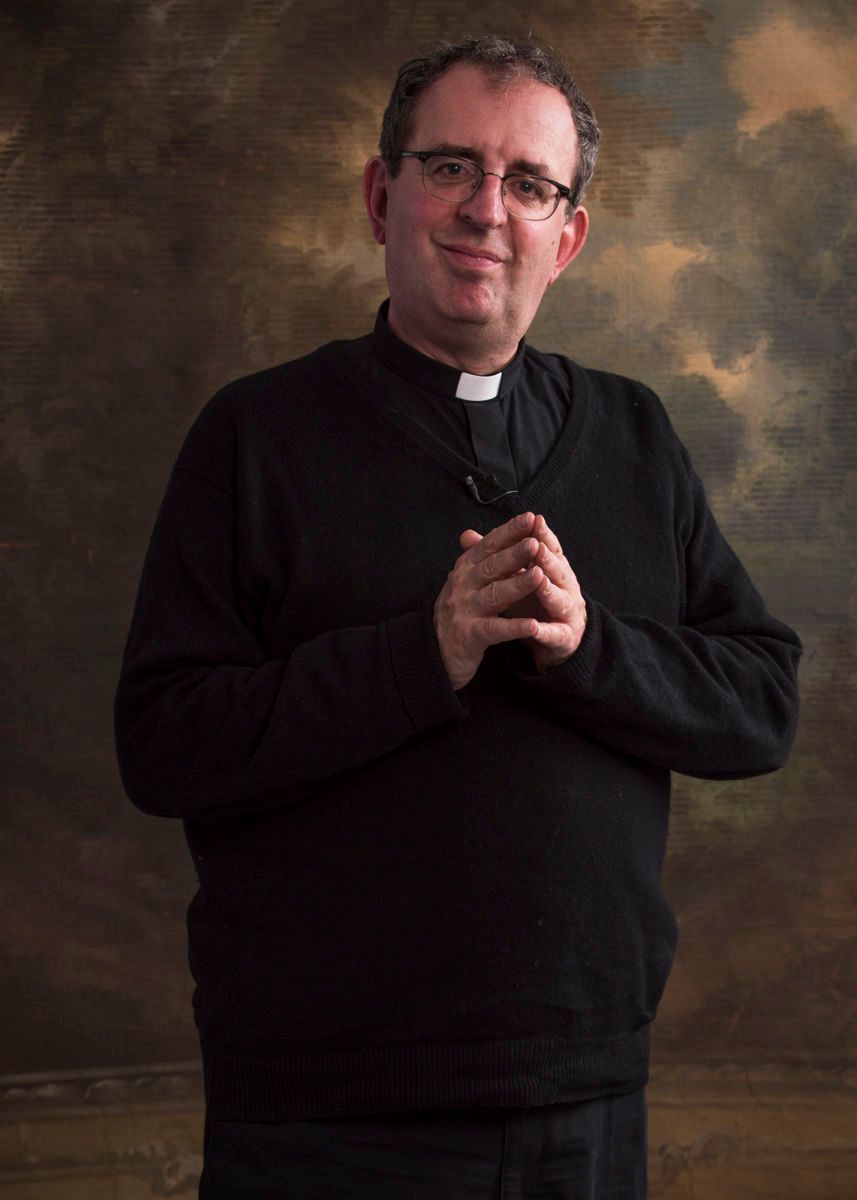 The wonderful Rev Richard Coles ,one of the top 'desirable dinner guests' of the nation ? A most entertaining and engaging gentleman that it was my pleasure to photograph at my Pop-Up studio at the Artshouse in Stratford upon Avon during the Stratford Literary Festival where he was appearing in November 2016. The background is one of my collection of Victorian photographic backdrops, hand painted probably by scenic artists around 1895, here is the story of the Backgrounds and their history.

The studio was called PICTURES and was located on the ground floor at 164 High Street, Deritend, Birmingham B12 0LD. My work at this time was a great mixture of product, location and general commercial commissions that were often related to the automotive industry, part of that work was photographing models that would be part of the culture of advertising, a beautiful girl with a car or industrial product was seen as perfectly natural, as they say 'Different Times' . I found that I had the skill to work well with models and started to work much more with a local printers who produced bespoke & stock calendars that were used by many businesses to promote their business, they were often topless or glamour based, however I was influenced by more romantic fashion photographers such as Sarah Moon and the fine art tradition from renaissance to the victorian and into the stylised hollywood genre of glamour, I would build sets, create tableaux and produce personal work that would now be called 'Boudoir' photography.

My then part-time assistant was Robert Twigg who was also a student from the Birmingham School of photography, he was an aspiring fashion photographer and had used an old studio in Balsall Heath as a location for a fashion shoot, he said it was worth checking out as the studio had some old backgrounds that I may be interested in for some upcoming work.( Bob Twigg went on to become David Bailey's Assistant and a successful photographer in London).

I arranged to meet the owner Malcolm Dyche and see his studio, it was a total revelation, an old Victorian house that had seen much better days had a 'showcase' of a few images and a rundown exterior , I was meet by Malcolm and his wife and he kindly showed me a daylight lit studio with an Umbrella of what looked like plaster and an amazing cast iron and what looked like mahogany stand with a painted background, it was perfect for a prop and he kindly agreed that I could hire the background for an upcoming project, I don't remember the conversation but he or I discussed the purchase of the background as he was obviously way past retirement age and maybe he thought it would be an opportunity to realise the cash , although I was doing ok, I was just about to try and buy a house so spare cash was always spoken for, but I loved antiques and such a beautiful object would be wonderful to own, so we agreed a price if I remember was £250 ( approx £2000 today) , a sum that in context was much more than I could afford but I wanted this and could certainly use it for at least one project.

The stand and what I discovered were many backgrounds were used on a calendar commission and used for a few portraits, but when I managed to buy my first house in Harborne (37 Albany Road) it became a decorative feature in the properties I lived in and a fixture at my own home based studio when I lived in Wimpstone, Stratford on Avon and went on to follow my house moves till 2010.

Since 2010 it has been in safe storage and is now looking for another home. Hopefully there is interest in it that shall keep it in Birmingham, as its history is far more interesting than my ownership and use, I was aware it was a significant object, but recent research show that there is over a hundred years of photographic history that reflects the diverse history of Birmingham.

Ernest Dyche (1887-1973) was a self taught photographer who opened the Palace Studio at 32 Coventry Road, Small Health, Birmingham. The Palace studio was situated close to the Bordesley Palace Theatre and Ernest Dyche developed a specialist trade in theatrical portraits producing portraits of the visiting Musical Hall and variety acts who performed at the Bordesley Palace theatre and other Birmingham music halls and theatres.. He also provided portraits of individuals and families and wedding portraits at his studio. Dyche opened a second studio at 354 Moseley Road, Balsall Heath, Birmingham B12 9AZ. It is at this studio that I meet Ernest Dyche's son Malcolm who was born in 1921 and worked with his father as a photographer. I believe the studio had remained unchanged from the time Ernest had moved in, the studio space seemed to be designed as a studio space - the house would be a residence, and the clients would go through to the rear of the property on the ground floor, to what I remember was a space approximately 6 metres x 8 metres with a defused glazed roof that was probably 4 metres high, it was certainly a light and spacious space, that would certainly be perfect for a small group to be photographed in, I also remember a plaster covered umbrella shaped reflector, I had seen something similar at the life-drawing studios at the Royal academy but could not see a light source that shone into it, maybe long lost or not used, certainly by the time I saw the studio, it did not resemble a modern photography studio, but a shabby victorian property in need of decoration and maintenance.

The history of Birmingham would be echoed in the history of Ernest Dyche studios from the affluent Victorian days ,through to the Edwardian era, the first world war and then the depressions of the 20's & 30's, the second world war then the 1950's when Birmingham was an industrial powerhouse, but needing a new influx of workers, by this time the city had expanded, the once desirable area of Balsall Heath had become run down and poorer, so the clients from the Music Hall and theatre had long since changed, the new clients were the windrush generation and all who flocked to seek refuge or fortune in industrial Birmingham, immigrants would find employment and as was the custom, they would send photographs back home, or just celebrate a birth,wedding or birthday with a portrait, Ernest & Malcolm started to record these events with portraits in their old studio, often with the Victorian Backgrounds on a stand that had been made in 1895 by Beardmore, The E.A Background Carrier.

In the mid 1990's I met Pete James who was to become a close friend of my father Willoughby GUS Gullachsen, a drama and TV photographer who then shared my studio Pictures, Bartholomew Row, near the city centre. Pete James was head of Photographs at Birmingham Central Library and was the person who introduced me to the archive of Ernest Dyche. The work is archived now in the Birmingham photography collection which is one of the best collections in the world. It was a great privilege to have Pete James as a supporter and friend of my father and I as we both worked on Birmingham based projects that are now archived in the same collection.

In the book 'A World City - Birmingham and its people portrayed ' Pete James & Dr Chris Upton (2003) published as a part of the City of Culture bid . Portraits from the Ernest Dyche collection are featured with the background identifiable, by coincidence, both my father and I were featured with documentary and portrait projects that were part of the Birmingham photographic history.

As the Studio at 354 Mosley Road was already a studio from 1890 before Earnest Dyche moved in, it maybe that the Background stand was part of the fixtures and fittings, the original patent was maybe for some of the mechanics, with the date inscribed on one part has a inscription of Oct-30-88, but another date of 1895 that maybe the date the cast work and stand was completed, so it is reasonable to assume the stand & mechanism are from 1895. The Canvas were painted and attached to the tubes seem to be original and would be produced as a product for the then expanding photography business, however one that is just black felt maybe a later repair.

Here are some reference images of the background in use, the original project that the Background was used for was a Calendar commission that sadly I have since lost as the original transparencies were delivered to the client Moments Calendars a division of CBE Printers and I lost my copy, some more images are part of the archive at Birmingham Central Library , but as yet are not catalogued .

Images of the Victorian Stand and Background, originally from the Studio of Ernest Dyche, Balsall Heath Birmingham.